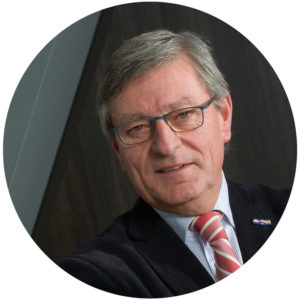 Han Bekke (1949) has a long career in the Dutch and international fashion and textile industry with a specialisation in textile and clothing marketing, trade policy, public affairs and assocation management. He worked for more than 40 years for several trade associations in the Dutch clothing and knitting industry, lately as director general of MODINT (Dutch trade association for fashion, interior and textiles) which position he held till 1-1-2013. In March 2013 Han Bekke was elected as chairman of the board of MODINT.

Other functions Han Bekke serves on are:

On the occasion of his silver jubilee in the clothing and knitting industry, Han Bekke was awarded in May 1996 with the golden MODINT Award for great services to the clothing industry. Han Bekke is member of Rotaryclub Amsterdam-Zuidas and was its President in 2003. Since 2000 Han Bekke is Freeman of the City of London and member of The Worshipful Company of Framework Knitters.

In 2007 Han Bekke was knighted by Queen Beatrix of The Netherlands in the Order of Orange Nassau.

In 2013 he received a special recognition linked to the highest fashion award in The Netherlands, “The Grand Seigneur”.