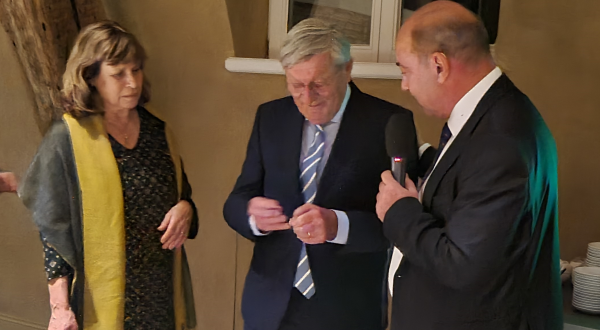 Immediate Past President of IAF Han Bekke was awarded the IAF Golden Pin by IAF President Cem Altan on November 7, 2021 during the 36th IAF World Fashion Convention in Antwerp, Belgium.

The IAF Golden Pin is awarded to those who have been of extraordinary importance to the positive development of IAF. Only a few IAF Golden Pins have been awarded throughout IAF’s 49-year-old history.

Han Bekke’s importance to IAF cannot be overstated. Effectively, he was the IAF’s first Secretary General, supporting the Board of Directors of the organisation founded in 1972 when he had just joined the Dutch apparel industry association in Amsterdam. In 2006 when the IAF secretariat moved from London to Amsterdam, Han Bekke would become its Secretary General; a role he took in addition to his role as Director General of MODINT, the Dutch apparel and textile industry association. In 2016 Mr. Bekke took over the IAF presidency from then CMAI President Rahul Mehta, a position he would hold until last week, when Cem Altan succeeded him. Mr. Bekke will retain his seat in the IAF Executive Committee as Immediate Past President.

Han Bekke embodies the international spirit of IAF and the benefits this brings to its participants. Leading IAF he has grown to be a strong advocate of international supply chain solidarity and collaboration as well as of the urgent need to create a less fragmented set of rules and regulations for the apparel industry.