Prepared by Fast Company Magazine and presented in Turkey for the first time, “Sustainability Leaders 50” list results were announced. Yeşim Group CEO Şenol Şankaya was among the 50 leaders selected by a global jury from 135 leaders nominated during the two-month application process. 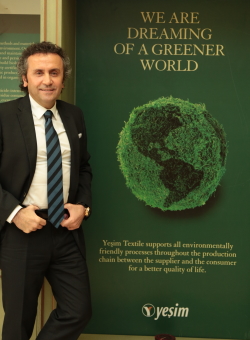 he jury did not make its assessment based on the existing public perception of the leader but based on the projects the leader has carried out so far, the achieved results, and future plans. As a result of the evaluation Şenol Şankaya, was listed among the top executives of leading industrial giants in Turkey.

In 2005, Yeşim was the first company in Turkey on behalf of the sector, to receive SA 8000, the world’s most prestigious social compliance certificate. Since 2015 it is also the owner of the OEKO-TEX STeP certificate. Yeşim, which started its own treatment facility in 2000, is among the leading companies in the sector with its many energy and water-saving projects and has been providing free kindergarten services to its employees for 33 years. Yeşim is the first textile company in Turkey who signed Global Compact (GC) in 2006, and WEPs in 2015, and it has been on the GC Board of Directors since 2014. Yeşim is also among the founders of the Women’s Empowerment Working Group and was the co-chairman of the Group between 2016-2019. It took an active role in the foundation of the Women’s Empowerment Bursa Platform and continues to be a leading example of women’s labor force participation in Turkey.