The UN Global Compact has called on all businesses to pledge support for international cooperation and inclusive multilateralism against global risks on the eve of the 75th Anniversary of the United Nations. More than 1,000 CEOs from companies in over 100 countries have responded to this call and demonstrated their support for the United Nations and inclusive multilateralism by signing the Statement from CEOs for Renewed Global Cooperation. Yeşim Textile’s CEO Şenol Şankaya was among the CEOs signing this statement. 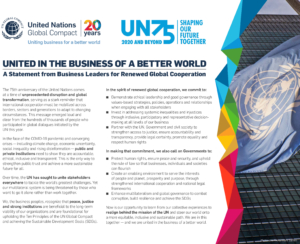 The CEOs gave the following message by endorsing this statement which was declared at the UN Private Sector Forum held on the 21st of September during the commemoration of the 75th Anniversary of the United Nations: “We, the business people, recognize that peace, justice and strong institutions are beneficial to the long-term viability of our organizations and are foundational for upholding the Ten Principles of the UN Global Compact and achieving the Sustainable Development Goals. We are united in the business of a better world.”

Businesses operating in Turkey have also shown strong support for the Statement from CEOs for Renewed Global Cooperation. The CEOs of 45 signatories of the UN Global Compact from Turkey have signed the statement, pledging their involvement in the global cooperation. Yeşim Textile’s CEO Şenol Şankaya was among the CEOs signing this statement.

American & Efird Invests in US Platform
Scroll to top