Macao Fashion Festival 2019, jointly organized by Macau Productivity and Technology Transfer Center (CPTTM) and Macao Trade and Investment Promotion Institute (IPIM), was successfully held from, 17th to 19th October 2019. Borana, a Brazilian beachwear label originated from the costal city of Victoria, was invited to appear in the “Opening Ceremony and the Belt-and-Road Initiative Fashion Parade” of Macao Fashion Festival 2019. Borana, together with fashion labels from the Guangdong-Hong Kong-Macao Greater Bay Area, regions along the “Belt-and-Road Initiative” countries, and Portuguese-speaking countries, opened the curtain of the 10th Macao Fashion Festival with their fascinating collections.

With active assistance and promotion from International Apparel Federation and Texbrasil (The Brazilian Textile and Fashion Industry Internationalization Program), Borana showcased its collection on the Macao Fashion Festival runway for the first time. Together with designers from seven other regions (including Guangzhou, Shenzhen, Taipei, Hong Kong, Macao, Jakarta, and Praia), they put together a fashion parade that mesmerized the Macao audiences with fascinating east-meet-west cultures and latest fashion trends from around the globe.

Borana was founded by young and talented female designer Patiara Augiar in 2010. She is well-known for her comfortable yet innovative styles, asymmetric cut, original-designed prints, and use of weaving to create distinctive designs that reflect the natural colors of Brazil. Looking at her collection, audiences deeply felt the cheerful and leisurely Brazilian vitality and the passionate love that Brazilian people have for the sun and the beaches. Patiara brought the summer heatwave into the Macao autumn with her fashion and stage show. 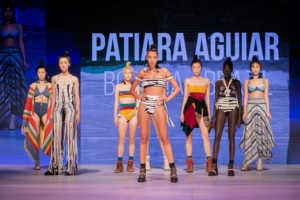 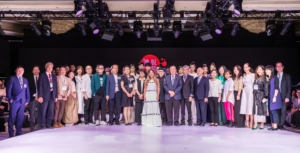