35th IAF World Fashion Convention in Lahore, Pakistan
The IAF’s 35th World Fashion Convention will be organised together with IAF member PRGMEA (Pakistan Readymade Garment Manufacturers and Exporters Association) on November 12th and 13th 2019 in Lahore, Pakistan. IAF and PRGMEA have chosen the theme ‘Building Competitive Supply Chains Together’. New technology is changing the industry, but often it only works if several players in the supply chain are collaborating to implement the technology. In this Convention, brands, retailers and manufacturers from the fashion industry are gathering in a country that is one of the world’s main suppliers of garments to discuss in detail how we can all collaborate to build the most competitive supply chains.

IAF Conventions are traditionally a mix of gathering insights at the conference and extending one’s network at the social events and this Convention in Lahore will be no exception. The IAF Golf Tournament, a festive fashion dinner and a facultative study tour will be part of the program. 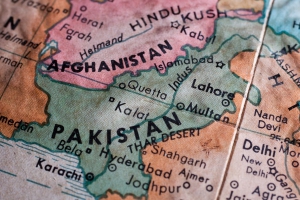 Networking and exploring new business opportunities
This IAF Convention offers a unique opportunity to visit and discover a very important and sometimes underestimated apparel production country. It enables participants to efficiently meet (potential) business partners at a high level event in a safe environment. For anybody already doing business in Pakistan or exploring to start to do so, we highly recommend you to join us, November 12th and 13th in Lahore.

Travelogue Matthijs Crietee
‘I visited Lahore Pakistan April 8th-12th to prepare for the 35th IAF World Fashion Convention there in Lahore. IAF’s Pakistani member association the Pakistan Ready Made Garment and Exporters Manufacturers Association (PRGMEA) was a great host and we were able to cover a lot of ground together, creating a strong conference program under the theme ‘Let’s Grow Together for a More Prosperous and Sustainable Future.’ In the coming weeks we will invite and secure our speakers and sponsors and we aim to open the registration for international delegates in May. Most likely, the Convention will be held at the Pearl Continental hotel, in which I stayed and which was excellent, with truly outstanding conference rooms and foyer.

At the same time, I visited the Texpo Fair, which was also held in Lahore and which brought together hundreds of apparel and textiles people from all over the world. The Texpo Fair was a success; it was very well organized and the fair buzz was there. The highlight was a formal dinner in the gardens of (Punjab) Governer’s House, with an opening speech by the President of Pakistan, Mr. Arif Alvi.

Naturally, safety is an issue that cannot be ignored when organizing a convention in Pakistan and the decision to come to Pakistan was never taken lightly. Undoubtedly, Pakistan has made big progress in bringing terrorism under control, particularly in the eastern province of Punjab. And understandably, the reputation of the country does not improve as fast as the actual safety situation. The concept of the IAF convention is to travel the world and to give member associations, particularly of the main apparel countries in the world, the chance to host an IAF Convention. Pakistan, close to the top 10 exporter of apparel in the world and with a population of just over 200 million certainly fits the bill. In the light of geographical changes of apparel production, Pakistan’s apparel industry also now has the potential to grow fast. In any case, my experience in Lahore was a very positive one, feeling safe and seeing that a large group of foreigners from all over the world did too.’