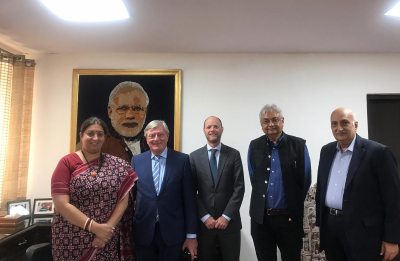 IAF President Han Bekke and Secretary General Matthijs Crietee on Thursday November 29th visited member associations BGMEA and BKMEA and educational member BUFT in Dhaka. IAF was informed about the accelerating development the garment and knitting industry in Bangladesh. We were able to obtain a better view on the pressure the Bangladeshi garment industry faces in the squeeze between growing costs and sometimes even declining prices paid by buying brands and retailers. As the IAF President stressed during the IAF Convention in Maastricht last October, the race to the bottom in our industry should stop.

IAF is thinking of setting up a manufacturers meeting in May next year in Frankfurt, Germany on May 14th.Other issues that were discussed were the IAF-ITMF project to help reduce auditand standard fatigue; trade policy, particularly Bangladesh’ GSP status and Brexit and efforts to facilitate buyers connecting to new suppliers, such as the Foursource online platform and the role of sourcing fairs. In Dhaka we had the opportunity to introduce IAF and to indicate the challenges we see for the future in a very well attended press conference organised by BGMEA.