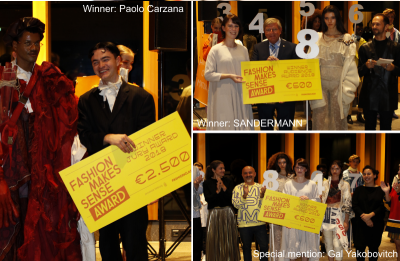 Yesterday evening, on October 9, the winners of the second Fashion Makes Sense Award (FMSA) 2018 were announced during the IAF Festive Fashion Dinner at Château St. Gerlach. The award was brought to life by FASHIONCLASH and is meant to motivate designers who create with a passion for humanity and the environment. IAF and MODINT, hosts of the convention, are proud to have offered the project and the 10 designers a global stage at the international gathering.

This year, 10 designers were selected to show their work to the public and a jury panel in the hope of being named the winner of the Fashion Makes Sense Award 2018. The FMSA consists of two awards: the jury prize worth € 2.500,- and the public prize worth € 500,-.

The FMSA project aims to develop talent and support sustainable design on the one hand and raise awareness of sustainability related issues with a larger audience on the other. FMSA has been created in co-operation with the Province of Limburg and was launched during the FASHIONCLASH Festival 2017 in Maastricht. FMSA is meant to motivate and stimulate promising talent to think about sustainability and to offer young talents support in developing a durable collection.