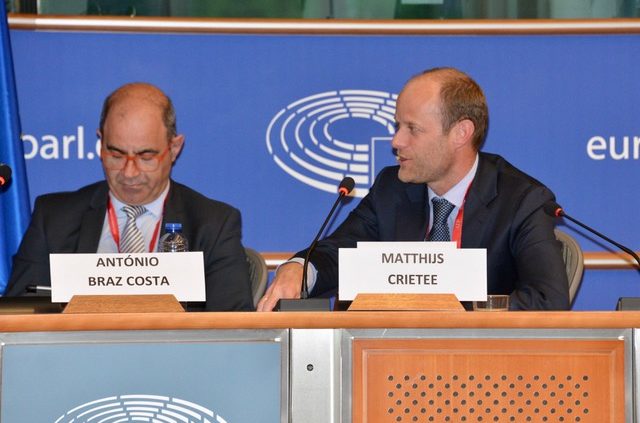 IAF participated in a press conference about “The rebirth of Portuguese Textiles” held at the European Parliament, organised by IAF’s Portuguese association member ATP and hosted by José Manuel Fernandes, Member of the European Parliament. The Portuguese Fashion and Textile industry has undergone a significant recovery which is all the more remarkable because it has taken place during the 2011 Portuguese crisis and subsequent bail-out. ATP President Mr. Paulo Melo and ATP Director General Mr. Paulo Vaz made clear that the success was based on a well-defined and implemented strategy as well as support from EU funding programs.
IAF’s secretary general Matthijs Crietee and Euratex’s director general Francesco Marchi placed the Portuguese in a broader European and global context. They see the combination of quality and reactivity as the industry’s strongest USP. Crietee remarked that the strategic quidance of ATP, leading to investments in the entire system, including schooling, innovation, productivity, sustainability and international promotion has been an important factor of the Portuguese apparel industry’s succes. IAF helps its member associations develop their strategic industry plans and the Portuguese example is an important one for all to take a good closer look at.
https://www.iafnet.com/2016_01_22/wp-content/uploads/2017/05/ATP-press-conference.jpeg 427 640 Karin Broeksma https://www.iafnet.com/2016_01_22/wp-content/uploads/2016/01/iaf-300x185.jpg Karin Broeksma2017-05-16 09:16:402017-05-16 09:16:40Significant recovery Portuguese Fashion and Textile industry
Successful first session by IAF at Texprocess Forum on Industry 4.0