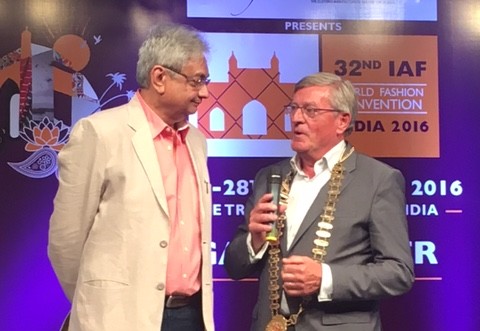 The members of the  International Apparel Federation have today appointed Han Bekke (chairman of MODINT, Netherlands) as its new President. He succeeds Rahul Mehta (chairman CMAI, India) who has held this position since 2014. The decision was taken at the general assembly of IAF as part of the 32nd IAF World Fashion Convention that runs in Mumbai (India) this week.

The IAF is the world’s leading federation for national clothing and textile associations from more than 40 countries, representing over 150,000 companies and over 5 million employees. Also individual companies from industry and retail as well as suppliers to this industry and educational institutes can be a member of IAF.

Han Bekke has a long career in the Dutch and international fashion and textile industry and has held different management positions. Since 2013 he is chairman of the Dutch Trade Association for Fashion and (Interior)Textiles MODINT, member of IAF. From 2006 till 2014 Han Bekke was secretary general of IAF and became its board member in 2014.

During the general assembly other industry leaders were nominated to the board: